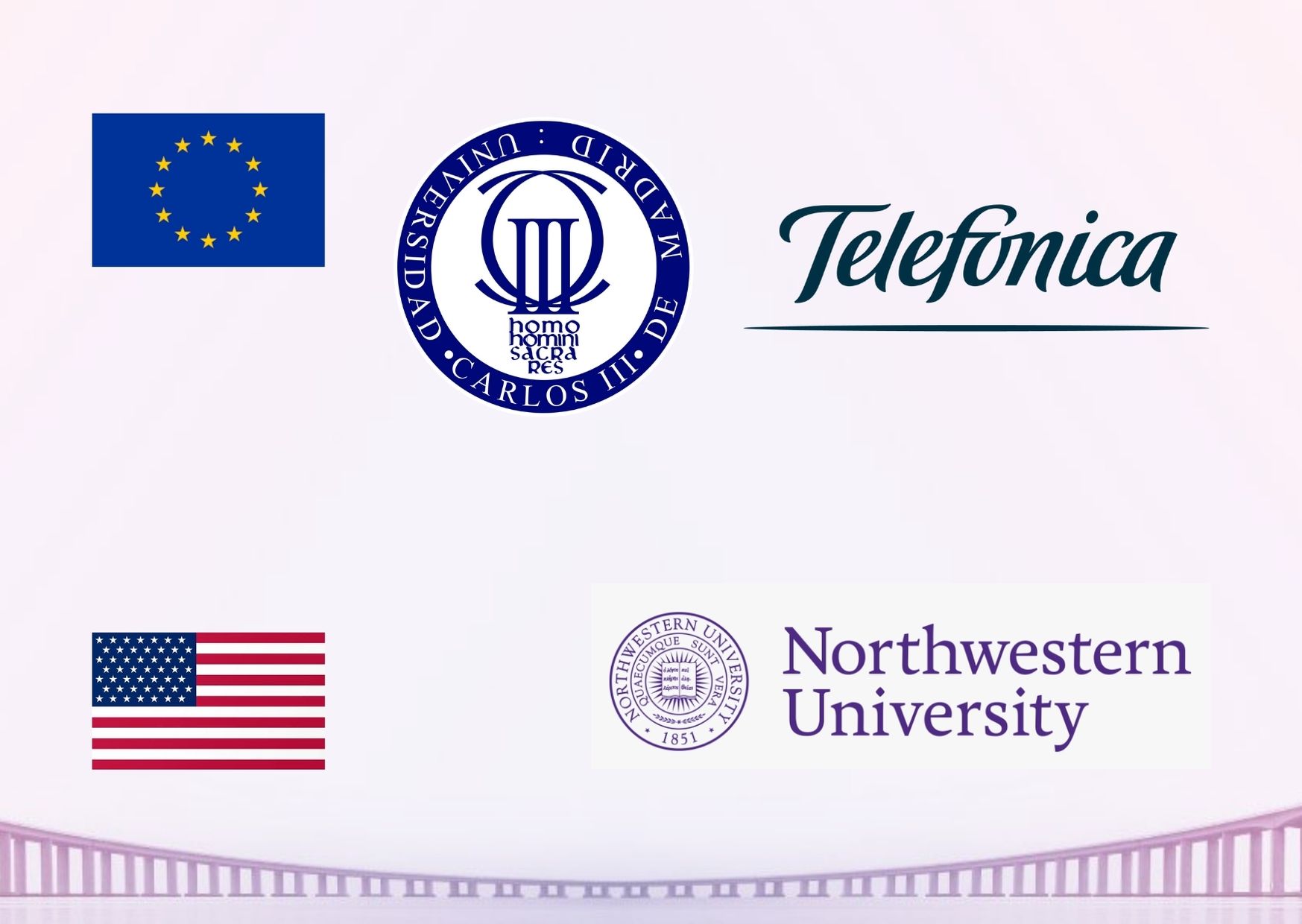 Universidad Carlos III de Madrid: Marcelo Bagnulo is an associate professor UC3M. His research interests include Internet architecture and protocols, transport protocols and measurements. Marcelo has published more than 70 papers in the field of communications in journals and congresses (including Infocom, Mobicom and IEEE/ACM Transactions on Networking) and he is the author of 19 RFCs in the Internet Engineering Task Force (IETF) including the NAT64/DNS64 tools suite for IPv6 transition, and the LMAP framework for large measurement platforms, which have been widely adopted by industry. Marcelo was a member of the Internet Architecture Board (2009-2011). He is the coordinator of the project and will be PI for UC3M. Marcelo will work on the measurementsof mobile access performancewhile roaming in the EU.

Telefonica: Andra Lutu  is an Associate Researcher with TelefonicaResearch. Andra is part of TID’s internal innovation project ARIANA (Artificial Intelligence for Automatic Network Actions), focused on building custom Artificial Intelligence solutions for different networks and platform Telefonica operates, including their international roaming platform . The project also develops solutions for Telefonica’s IoT/M2M platform, with the goal of improving quality of service for customers. Before joining Telefonica, she worked on the MONROE project (2015–2018), involved in building the platform. Her work in the project resulted in five top-tier publications (Infocom’17, Mobicom’17, Infocom’18, Mobicom’18, WWW’19). She will be PI for Telefonica. Andra will work on the measurements of mobile access performance while roaming in the EU.

Fabián E. Bustamante is a professor at Northwestern University. His does research on computer networks and distributed systems following an experimental approach. Fabian regularly publishes in top conferences, including IMC, Mobicom, Hotnets, WWW. Fabian received the NSF CAREER award and the Science Foundation of Ireland E.T.S. Walton Visitor Award. He has released tens of open-source systems that have gained ~2 million users worldwide. Fabian has co-chaired multiple events, including the first US NSF/FCC Workshop on QoE, the first SIGCOMM Workshop on QoE and the SIGCOMM 2014 conference; he is currently co-chairing the IMC’2020.He will be PI for NWU. Fabian will work on the measurements of mobile access performance while roaming in the EU

Multi-Carrier Cellular Access (MCCA) allows cellular users to dynamically connect to different cellular networks without switching their SIM card. There are a number of advantages that can be realized through MCCA. MCCA users can improve coverage and performance, combining measurement-based dynamic carrier selection and predefined preferences on radio access technology (RAT) use (3G, 4G, 5G, wifi), irrespectively of which carrier is offering it a particular location. Google Fiis one provider offering commercial MCCA services. Google Fi carrier selection policy relies on static preferences regarding available carriers and RATs, while also leveraging local or crowdsourced monitors to track various metrics to inform carrier selection [Yuan18]. While MCCA services are becoming increasingly popular, little is known about their technical intricacies beyond what is described in their commercial offers. To date, there is no quantitative-based analysis of the relative performance benefits of MCCA services compared to traditional services. In particular, there is no information about MCCA performance while roaming, which is one of the key selling points of several of these offers. Measuring international roaming performance is challenging, as it requires international cooperation and logistics are daunting. In a previous study, we analysed the European roaming ecosystem for traditional carriers and its performance [Mandalari18]. We observed that international roaming imposes performance penalties because traditional carriers systematically use Home Routing (HR) while roaming. HR implies that traffic from and to the roaming device is routed back to the home carrier before reaching the Internet, instead of exiting directly through the visited-network Internet access. This extra leg adds latency, penalizing roaming performance. While it would be technically feasible to provide local Internet access to roamers (called Local Break-out), this is avoided by traditional carriers in order to enable visibility of the roaming-client traffic by the home operator. Visibility of roaming-client traffic is deemed necessary to avoid disputes and abuses involving the computation of the traffic carried by the visited network on behalf of the roaming client. Seizing the performance gains resulting from local breakout is yet another potential benefit that MCCA can achieve for their customers in the international roaming context.

The objective of the project is characterise the performance of MCCA services while roaming. We will collect quantitative information to help us understand the benefits and downsides of MCCA service when used abroad. We will focus our analysis to clients from MCCA operators in the US that are roaming in the EU and investigate how their performance compares to both traditional US carriers while roaming and local EU carriers while providing local services in the visited network.

The project will be structured in the following tasks.

In this task, the team will do the preparation work for the experiments. This includes selection of the MCCA providers to be tested and buy their eSIMs, selection of hardware used for the testing and purchasing it, identify the MNOs the MCCA users will be landing and obtain SIMs from them (to be used to benchmark the roaming service of the MCCA provider against a native visited network user), design and implement the experiments. perform local experiments to validate the implemented tests.

In this task the team will execute the measurement campaign planned in the Preparation task. This will include several rounds of measurement and coordination of measurements across multiple countries.

In this task, the team will analyse the results obtained in the measurement campaigns. They will start processing as soon as we have the earliest results so to use the analysis to improve the subsequent tests.

This task will take care of managing the project, including the coordination between the EU and US partners, as well as with the other entities hosting probes. It will also take care of the dissemination and communication actions, including the publication of a repository including data sets and other information regarding the experiments.

The Project will address the impacts in relation to the NGI initiative:

MCCA has received significant interest from the industry, perceived as a potential threat by incumbent Mobile Network Operators (MNOs) and as an opportunity by potential new players to this market ( e.g. Google, Apple, Samsung, Huawei). The irruption of such large players has the potential to drastically change the mobile provider market altogether. MCCA enables the provision of mobile communication services without the need of having a radio access network infrastructure (much like a virtual MNO), but unlike virtual MNOs which are usually perceived as a lower quality offer, the MCCA technology has the potential to offer an even better performance than traditional MNOs. This is particularly true in the roaming context, as MCCA can improve performance by supporting Local Breakout. However, there is little information about the performance benefits that can be achieved through MCCA in general and no information at all in the case or roaming. To date, we are only aware of the work in [Yuan18] which analyses and models conflicts between inter and intra provider policies for selection of radio access in Google Fi. They perform a “small-scale user study” [sic] focussed on measuring the impact of policy conflicts in performance. In [Mandalar18], we performed an analysis of performance of mobile communications while roaming for traditional MNOs. The work proposed in this project aims to inform the future evolution and adoption of MCCA commercial services. It expects to provide quantitative information about the performance benefits achieved by MCCA, focusing in US-EU roaming scenarios. This information will inform both the MCCA technological evolution as well as the response from traditional MNOs, in particular whether currently used home routing strategies can be sustained in the future in the light of their performance implications.

More specifically, the results of the project will include: